Top 9: Best Air Purifier to Rid Your Home Of Mold and Dust

Before choosing the best air purifier, let’s talk about what they are: devices that purifies the air by trapping airborne contaminants, such as mold spores and dust. A purifier can even trap odors and toxins that leave a bad smell in your home.

What an air purifier will most likely not do is kill or trap viruses, such as COVID-19. Even HEPA filters are not fine enough to trap the tiny virus particles. UV lights may be effective to kill some viruses, but not in the amount of time that the air is in the machine. They can only kill what’s trapped by the filter.

They help reduce allergens, mold, dust, and smells, but we will not lie to you about their effectiveness. They may keep your family healthier, though, and safer from mold, dust or fireplace ash. Some manufacturers like IQAir claim their machines can filter truly tiny particles out of the air.

Although there are different types of air purifiers, they all have the same basic function. The filters rely on fine sieves that filter the air to capture impurities. The purifiers continuously circulate air in and out. The more times the air passes through the purifier, the cleaner it becomes.

What Types of Air Purifier Are There?

There are several types, including the popular HEPA air purifiers. HEPA purifiers have a high trap rate of 99.97 percent for particles in the air. Unlike some types of purifiers, the particles that are captured by those using HEPA filters do not multiply or spread.

An electrostatic precipitator purifier also captures air and purifies it, but it relies on charging the contaminants and collecting them on electrostatic plates instead of a filter. The plates require considerable maintenance because of the high level of contaminants that collect on them.

Activated carbon air purifiers are another popular choice for consumers. These purifiers rely on carbon that is heated to an extreme temperature to eliminate air pollutants. In addition to capturing pollutants, such as dust, the activated carbon purifier can also trap volatile organic compounds and chemical odors.

What Are the Benefits of an Air Purifier?

The most obvious benefit of an air purifier is that it helps to purify the air. However, the benefits extend beyond that. For instance, by cleaning the air, harmful allergens are reduced and can be eliminated, which may make the home safer for people who suffer from breathing disorders, such as asthma.

They also help to neutralize cigarette smoke. Instead of the smoke odors ending up in clothes, upholstery, and curtains, it can be trapped and neutralized by the machine.

A purifier with a HEPA filter traps particles, including many types of mold and some bacteria, which are larger than 0.3 microns. Mold spores range from 2-100 microns in size, so are large enough to become trapped in a HEPA filter.

Most bacteria are smaller than that, though, and some viruses are much smaller. For example, COVID-19 is only 0.12 microns in size.

Do You Need an Air Purifier?

If you have dust mites, mold, cook strong-smelling foods, or have a lot of dust in your home, you may want to consider an air purifier. You should also consider buying one if someone in the home has allergies or lung disease. They’re not a cure-all but can improve the air quality in your home.

They can also be helpful if there is a strong smell of disinfectants and varnish in the home. The odors can become trapped in the carpets and other fabric furnishings, and remain for a long period of time. The purifier can help to reduce their potency.

How We Chose Our Ratings

There are several factors that influenced how we chose the 10 best air purifiers and where they ranked on the list. For instance, some types of purifiers were more efficient in trapping air pollutants than others.

Another consideration is the CFM rate. The cubic-feet-per-minute rate provides an estimate of how efficiently a purifier captures airborne particles. The higher the CFM rate, the better the purification rate it is capable of delivering.

The noise level is also a factor. Some purifiers work quietly in the background, while others might make considerable noise while they are operating.

The Rabbit Air MinusA2 uses a six-stage purification process that is designed to catch everything from large particles to chemical vapors. The purifier has a customizable filter that allows you to choose filtration for pet allergies, germ defense, odor elimination or toxic absorption. It has a CFM rate of 99.97 percent efficiency, which makes it one of the most efficient available.

The air purifier is also quiet, which makes it convenient to use in any room. 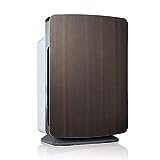 The Alen BreatheSmart air purifier has several features, including SmartSensor technology. The sensor automatically tracks the air quality and adjusts the airflow to account for any increase in allergens in the air. The air purifier also helps to save on energy because the sensor allows it to reduce its functions when there are few allergens present.

You can opt to use a filter designed to capture chemicals, bacteria and germs, dust and allergens, or smoke and other odors.

The Winix PlasmaWave 5500-2 relies on its PlasmaWave technology to reduce the pollutants in the air. The technology works by pulling the air through a HEPA filter that helps to eliminate 99.97 percent of the pollutants. The device then kills the bacteria and viruses to prevent contamination.

It has a smart sensor that controls its operations, which helps to save on its energy usage. 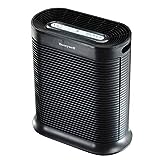 The Honeywell HPA300 air purifier also features a true HEPA filter. It has a carbon filter, as well, which boosts its ability to remove allergens and odors. The purifier can be used in large spaces with ease.

It has a four-stage purification process that includes pre-filtering.

This Levoit air purifier is one of the smallest devices available. It is convenient and easily moved from room to room. It relies on a three-stage filtration system that includes an activated carbon filter. The compact unit is generally considered a personal-use device since it only covers an area up to 86 square feet.

The purifier has a night light and is relatively quiet, even on the highest setting.

The Whirlpool Whispure air purifier has four fan speeds, and is one of the quieter devices available. It features a sleep mode that automatically changes during preset hours. The unit works well in large rooms up to 500 square feet. It has both carbon and HEPA filters that will need to be periodically changed.

It’s considered effective for users with asthma and other respiratory conditions. 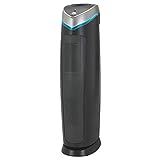 The GermGuardian has a true HEPA filter. Some air purifiers feature a blended HEPA filter, which does not offer the highest efficiency. The HEPA filter in this purifier is efficient at filtering for pet dander, mold and bacteria. It also features a UV-C light to destroy bacteria, mold spores, and viruses when they are captured.

It can be used in larger rooms, but operates more efficiently in small- and medium-sized rooms. 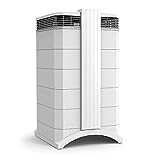 The IQAir New Edition HealthPro includes both carbon and HEPA filters. It can be used for larger rooms and features a timer. There’s an indicator to alert users when it is time to change the filter. The IQAir claims to have a hyper-HEPA filter that can remove particles down to 0.003 microns in size. 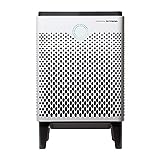 The AIRMEGA 300S air purifier has smart-enabled features. You can control the functions of the purifier using your phone or tablet. It even offers real-time monitoring of the air quality in the room. The AIRMEGA has an activated carbon and HEPA filter that provides a capture rate of 99.97 percent of all pollutants.

It even has a 99 percent capture rate for volatile organic compounds, such as paint odors.

Even if you ultimately choose one of the air purifiers from our top 10 list, you still need to narrow the list to the one you want to take home. When selecting a purifier, you must choose one that meets your specific needs. There are several factors to consider in your search.

You can opt to get an air purifier that is free of the bells and whistles that some have, but the additional features can make using and understanding the device easier. There is a host of features available, including digital controls, multiple fan speeds and programmable timers. At the minimum, you should look for a purifier that has an air quality sensor.

Where you plan to place your air purifier is also important. Air purifiers are typically designed to purify the air in a limited space, such as the bedroom. If you want to purify a larger area or more rooms, you will need to purchase more than one. However, if you plan to move it from room to room, you need to consider features that can make it easier to move, such as wheels.

We believe these to be the top 10 air purifiers because of their efficiency and features. We also tried to feature those that were best-rated by other consumers. If you choose a different purifier, remember to use our tips for selecting one that meets your needs.

As a participant in the Amazon Services LLC Associates Program, this site may earn from qualifying purchases. We may also earn commissions on purchases from other retail websites.